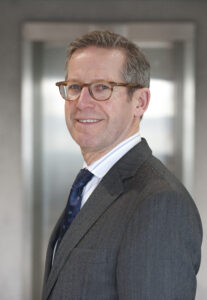 The Hague, 8 November 2022 – Thijs Starink has been appointed General Manager of Nexstep, the national platform dedicated to the reuse and decommissioning of (no longer used) oil and gas infrastructure. He has already fulfilled the position on an interim basis since the departure of Jacqueline Vaessen in July of this year. Starink will work for Nexstep two to three days a week, and he will also remain active as Senior Advisor E&P Assets for Energie Beheer Nederland (EBN).

Nexstep is a joint initiative of EBN and the Dutch oil and gas industry (united in Element NL) and has existed since 2017. The platform focuses mainly on an efficient and effective decommissioning of infrastructure that is no longer used. The aim is to reduce (social) costs through intensive cooperation between the oil and gas companies during decommissioning. In addition, Nexstep is committed to maintaining infrastructure that can play a role in the energy transition. In doing so, it works together with all possible parties involved and the government.

Menno Snel, chairman of Element NL and supervisory board member of Nexstep: “With the appointment of Thijs, we have brought in an experienced E&P manager with a proven track record. He knows the ropes and has an excellent network. For the phase in which Nexstep finds itself, lifting projects that serve the energy transition or reducing costs off the ground, he is the right man in the right place as far as we are concerned.”

Thijs Starink himself: “I am looking forward to this new role in a familiar, but still exciting and dynamic playing field. It is a challenge to get the many different parties that play a role or have an interest in the decommissioning to work well together. We are going to prepare infrastructure that is suitable for reuse for the energy transition. If this succeeds, it will be valuable for all involved and especially for Dutch society. It is great how my previous positions at the offshore contractor Allseas and at EBN now come together. That’s how I’m going to enthusiastically commit myself to connecting yesterday with today and tomorrow!”