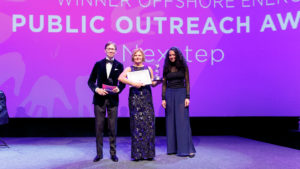 The Hague, 14 October 2019. – Nexstep, the national platform for the re-use and decommissioning of oil and gas infrastructure in the Netherlands, was named the winner of the Public Outreach Award on 7 October 2019. Each year, Offshore Energy awards this prize to an initiative that has delivered an extraordinary achievement by creating more energy transition awareness. Jacqueline Vaessen, General Manager of Nexstep, received the prize during a special gala and awards dinner at the Amsterdome in Amsterdam.

“Winning this prize is a big boost for Nexstep and its founders. Already in 2016, EBN and NOGEPA took the lead by developing the Masterplan for Decommissioning & Re-use of the oil and gas infrastructure in the Netherlands together with IRO. This plan has laid the foundation for Nexstep and it is thanks to the foresight of our founders that we are celebrating our two-year existence here at Offshore Energy,” says Jacqueline Vaessen.

Nexstep, National Platform for Re-use & Decommissioning, was established in 2017 by EBN and NOGEPA, as representatives of the state and the oil and gas companies. It is a collaborative umbrella organization that coordinates, facilitates and seeks dialogue on the re-use and decommissioning agenda for oil and gas infrastructure in the Netherlands. As the public face of the re-use and decommissioning of oil and gas infrastructure in the Netherlands, Nexstep informs and involves stakeholders and the general public directly about its work.